From graduate student to world scholar

Every time a door opened for Yuki Asahina, he walked through it. But, ah, the key to successfully walking the pathway of life, and jumpstarting a career in the field that fascinates you, is to look for a door in the first place.

That’s exactly what happened to Asahina, 31, who has been an assistant professor at the Graduate School of International and Area Studies at Hankuk University in Seoul, South Korea, since 2020. Before that, he spent a year as a postdoctoral fellow at Harvard University’s Reischauer Institute, after earning his PhD and master’s in Sociology at UH Mānoa.

“When I was at Harvard, a senior faculty member said UH Mānoa had been the powerhouse in producing a high volume of scholars and students in topics related to East Asia, and had a strong alumni network,” said Asahina. “I believe that the quality of social scientific knowledge about Asia produced in Saunders Hall – which houses many College of Social Sciences classes (CSS) – is superb, even compared with other top-tier schools.”

Born and raised in Japan, Asahina first heard about UH Mānoa as an undergraduate at a small liberal arts college in Tokyo. “In my senior year I met Christopher Bondy, a new sociology faculty member who had graduated from UH Mānoa. I told him that I wanted to learn more about sociology – in particular, about social movements in Japan – and he recommended that I apply at UH Mānoa to learn from his former CSS professor, Patricia Steinhoff.”

Asahina was appreciative of his entire learning experience as a graduate student at the flagship of the 10-campus UH System.

“My graduate committee members were always very supportive, and my friends in the department were kind and collegial. It was only after I graduated from UH Mānoa in 2019 that I learned many people did their graduate studies in environments that were not very supportive at all,” he said. “Dr. Steinhoff, in particular, was always positive and available as my graduate advisor. She was known for her detailed, handwritten comments – sometimes dozens of pages long – and meticulous edits. No doubt, she showed me how to raise the standard of self-expectations for my current teaching and mentoring.”

After graduation, CSS would continue to open doors for Asahina. While based in Seoul, he continues to work closely with scholars based in Japan, many with UH Mānoa ties. For example:

With a research expertise in social inequality and political sociology, and a focus on East Asia, Asahina is working on a book manuscript about inequality and insecurity among millennials in Tokyo and Seoul. He also has a forthcoming research paper in the Journal of Contemporary Asia with Jaeseog Yang of Waseda University titled, “Death from Overwork Under Pandemic: How Delivery Work Became a Locus of Public Debate in South Korea.”

In his free time, Asahina frequents a nearby climbing gym with a UH Mānoa graduate student who is collecting data in Seoul; enjoys bike riding in South Korea, which is actually one of the most remarkable countries in the world to explore by bicycle; and even pursues a sport that he first picked up in Hawaiʻi.

“I learned surfing when I was at UH Mānoa and, when I can find time, I drive to Yangyang-gun, a coastal town two hours from Seoul, to surf,” said Asahina. “I could not visit Hawaiʻi in the last two years due to COVID, but I look forward to visiting very soon!” 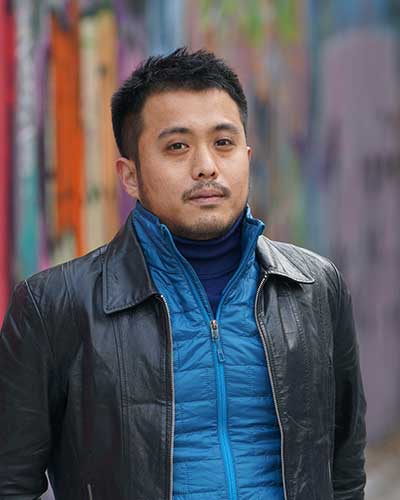 CSS graduate Yuki Asahina in front of a Tokyo mural. 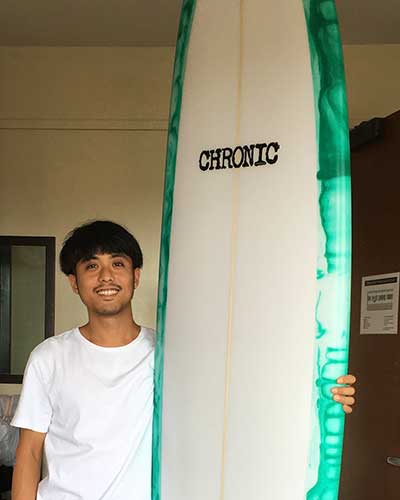 Asahina with his surfboard in 2016.
More CSS News