If you ask Thanathep Justin Nguyen, 21 – born and raised in San Bernardino, California – why he moved to O‘ahu in 2018 to enroll at UH Mānoa, he’ll tell you: He was motivated by a terrorist attack near his childhood home. On December 2, 2015, at a Christmas party for 80 San Bernardino health department employees, a heavily armed married couple entered the banquet room and shot 36 people, 14 of them fatally.

“I knew then that I wanted a career field that would prevent bad things from happening to good people – and Intelligence was exactly that,” said Nguyen, whose family has a military and law enforcement background. “I literally saw the word ‘intelligence’ in an email sent from the College of Social Sciences (CSS), and knew this was the opportunity that I couldn’t turn away from.”

Nguyen is among the first graduates of the UHM-INDOPACOM Mentoring Program for Intelligence, a collaboration between the U.S. Indo-Pacific Command and UH Mānoa. Designed, developed and launched in December 2020, the program was so popular that it enrolled a full class in only two weeks over the holidays. Students would benefit by learning about Intelligence jobs while receiving mentoring from active and retired leaders in all branches of the nation’s Intelligence Community (IC).

Admiral Phil Davidson, former commander of U.S. Indo-Pacific Command, and UH President David Lassner signed a Memorandum of Understanding, with the goal of expediting a career pathway for interested UH students seeking to work in national security. “This partnership positions our students to gain marketable skills and to network with leading experts in the field of Intelligence,” said CSS Dean Denise Eby Konan. “It’s part of UH Mānoa’s commitment to develop academic pathways to career opportunities, especially in the fast-growing areas of Hawaiʻi and the Pacific.”

Attesting to the program’s success is Nguyen, who graduated in December 2021 with a BA in Sociology and Interdisciplinary Studies: Peace and Conflict Resolution. In his senior year, after completing the mentoring training, he also became one of a handful of CSS Ambassadors (student leaders of the college), an officer of the Pi Gamma Mu International Honor Society in Social Sciences and the first CSS student to complete the Hacking for Defense program.

In the mentoring program, Nguyen attended weekly seminars featuring guest speakers from various organizations within the IC, and avidly read the required text for the course, The Spy and the Traitor: The Greatest Espionage Story of the Cold War. Nguyen was assigned two mentors: one a Navy intelligence officer, and the other a civilian National Geospatial-Intelligence Agency employee who was also a UH Mānoa Army ROTC graduate, current UH graduate student and officer in the U.S. Army Reserve.

“I would meet with them once a week, and they answered all my questions about what was talked about during the weekly seminar, in the assigned text or in my final paper titled, ‘Foreign Influence on Locomotive Construction in the Philippines,’ ” he said. On graduation Nguyen conducted a public briefing on his paper, in addition to a separate briefing in front of high-ranking Intelligence officers.

Nguyen became such an avid supporter of the mentoring program that he has given many talks about his experience, including one at a Hawaiʻi Defense Alliance seminar. In the audience that day was Chris Loftis, Hawaiʻi site lead of Huntington Ingalls Industries-Technical Solutions Division (HII-TSD), a global engineering and defense technologies provider. Loftis was so impressed by Nguyen’s presentation and professional demeanor that a job offer followed.

Today, Nguyen is workplace development coordinator at HII-TSD in downtown Honolulu, where he runs the day-to-day of the internship program. His duties include recruiting college students and graduates hoping for careers in the defense industry. Nguyen is awaiting security clearance, which should come faster than the standard time due to his completion of the mentoring program. After that, he can move into the role of an intelligence analyst, with his long-term dream to attend law school and become an IC attorney.

Nguyen encourages UH students with an interest in Intelligence work to consider signing up for the mentoring program. “It is beneficial in so many ways,” he said. “I learned many skills, including but not limited to networking, public speaking and collaboration, which all play a major role in jobs like mine on a daily basis.”

Plus the mentoring program is expanding. Beginning in Fall 2022, it will be supported by an Intelligence Studies focus in the CSS Department of Political Science. The four-course sequence will include an introduction to intel, Asia-Pacific geopolitical history and international relations, political designs and futuristics, and a capstone option, said Jairus Grove, department chair.

The new CSS Intelligence Studies for the Asia-Pacific will prepare students to compete for highly coveted spots in the UHM-INDOPACOM Mentoring Program for Intelligence. “Hawaiʻi is quickly becoming the hub of U.S. national security,” said Grove. “The study of national Intelligence offers UH students career advancement and excellent government benefits, and the opportunity for intellectually challenging national service while they continue to live in our community.”

For more information, send an email to the CSS Program for Civic Engagement at intern@hawaii.edu. 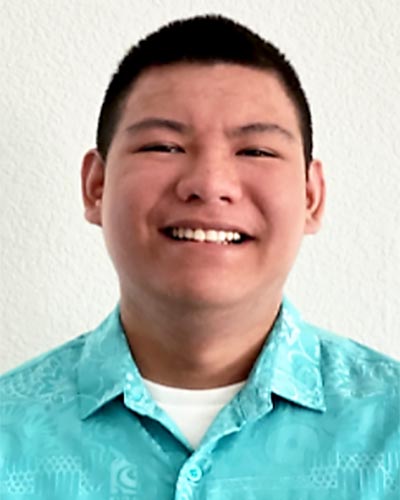 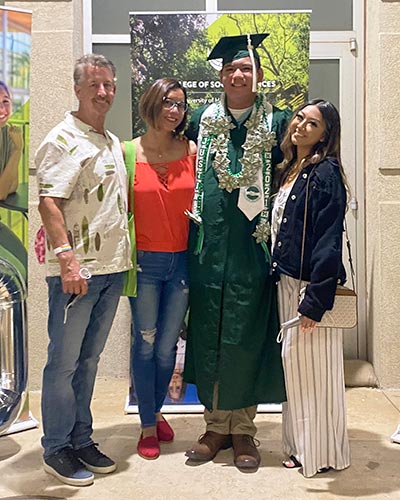 Justin Nguyen, in his UH Mānoa cap and gown, with well-wishers at Commencement in December 2021.
More CSS News