Studying the people of Angkor, Cambodia

An archaeological field research project that takes a bottom-up approach to better understand the Angkorian empire has received a four-year, $318,359 National Science Foundation award. Led by Department of Anthropology Professor Miriam Stark and University of Oregon faculty member Alison Carter, the P’teah Cambodia project focuses on the everyday lives of the Angkor people.

“Most historians chronicle the history of rulers: their dynastic sequence, their achievements and their monuments. Our work focuses instead on the people who made Angkor function,” said Stark. “Although Angkor is one of the largest preindustrial settlements in the world and has been the focus of substantial scholarly attention, we still know little about the people of Angkor: who built the temples, kept the shrines running, produced food, managed the water and farmed the crops that supported the empire. The P’teah Cambodia project will study Angkor households and their activities, and explore the roles of households and non-elites in the Cambodian past.”

The research team, co-directed by Stark and Carter and their Cambodian collaborators, will conduct mapping, excavating and post-fieldwork analysis in the Angkorian site of Prasat Baset in Battambang Province. Seng Khang and Jaratnapa Surinlert, two UH Mānoa archaeology graduate students who specialize in Southeast Asian archaeology, will also participate.

Greater Angkor, the Angkorian capital, was connected to and dependent on large provincial centers that channeled goods and labor to the capital, such as the Battambang Province. Battambang was once called the rice granary of Cambodia, traditionally produced big agricultural surpluses and was also a historically contested boundary area between Cambodia and Thailand. Its population was wealthy and a bit independent from the two nation-states. 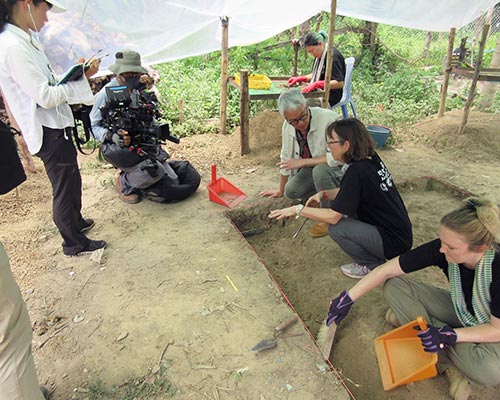 Professor Miriam Stark, second from right, explains excavation strategies at Prasat Baset to Singapore-based Peter Lee and camera crew during the 2019 filming of Cambodia’s Temple Kingdom: The Mark of Empire. 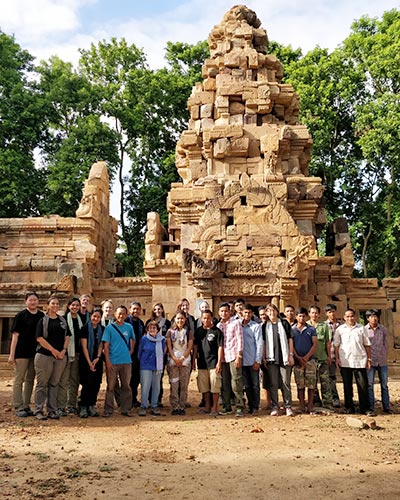