As the vice president of the American Arbitration Association, Lance Tanaka is an expert in negotiation. These skills came in handy during his time at the University of Hawai‘i at Mānoa when he was negotiating several career paths. He ultimately settled on a bachelor of arts with a major in political science. Tanaka says that he had “really great professors that helped shape a direction for me.”

Professor Bruce Barnes ran a practicum course in alternative dispute resolution with guest speakers. He suggested that Tanaka gain real-world experience at the Neighborhood Justice Center of Honolulu. There Tanaka mediated many cases and trained mediators through the community training program.

Tanaka grew up in Hawai’i and made the ultimate “tree change” for his compelling career. Along with his wife Shawn, a fellow UHM alumna, he has lived in Colorado with its rugged beauty and snowy peaks for almost 20 years. He says that one of the most rewarding parts of his role with the American Arbitration Association is “helping parties develop a resolution as opposed to someone telling them what they should do, as well as seeing people walk away saving money, emotional energy and having finality.”

For Tanaka, one of the highlights of his role is traveling to areas including Wyoming, Montana, Idaho and Nebraska. He recalls a conference room in Boise, Idaho, that had carpets that were the same color blue as Boise State University’s football stadium turf. In Lincoln, Nebraska, he enjoyed seeing a bright red 30-person conference room table, sporting the Cornhuskers “N.” He states that it is “inspiring seeing communities galvanized around their universities.”

Tanaka does his part in spreading “green pride” of UH Mānoa across Colorado. He serves as the president of the Colorado Chapter of the University of Hawai‘i Alumni Association and organizes new student send-off events for students and parents “reinforcing that new students have an alumni network that will help with their transition as freshmen.”

Passionate about his alma mater, this top negotiator will continue to advocate for UHM across his adopted state of Colorado and inspire the next generation to negotiate their unique paths in life. 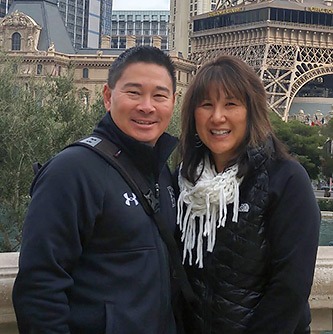